Our zoo and aquarium partners help us with research projects that would be impossible to conduct with polar bears in the wild.

Our fieldwork with polar bears takes us from Alaska to Svalbard and across the Canadian North, working in subzero temperatures and other Arctic conditions. But we’ve also discovered that, sometimes, critical polar bear questions can only be answered in a zoo setting—or through a collaborative effort involving wild and zoo bears (i.e., in situ and ex situ research).

The zoos, aquariums, and wildlife parks in our Arctic Ambassador Center network partner with us on key research projects. They fill knowledge gaps and answer basic questions, ultimately helping scientists better understand what polar bears need to survive in a rapidly changing Arctic.

Over the past two decades, studies with zoo partners have yielded invaluable insights, from documenting the polar bears’ hearing range to testing their energy use and how they find mates.

Following are current and recent projects.

Can polar bears count? Can they tell the difference between a large group of seals and a small one? Very little is known about polar bear cognition, the mental processes that include thinking, knowing, and problem-solving. Being able to count and assess volume would provide an evolutionary benefit to polar bears in terms of hunting, foraging, and navigation decisions.

Working with polar bears at the Ouwehands Zoo, this study will provide a deeper understanding of the polar bear’s numerical abilities. The insights gained will also aid in our understanding of cub adoptions that have been witnessed in wild polar bear family groups. Although a small piece of a complex puzzle, such information could ultimately play into management decisions concerning orphaned polar bear cubs, both in the wild and in zoos.

Polar bears have been tracked via radio and satellite collars for decades, providing crucial data to researchers and managers. Now researchers are working to make tracking devices smaller, lighter, and more efficient.

Scientists track bears to better understand how and where polar bears use their sea ice habitat and how movements between ice and land are changing. This allows researchers to more effectively identify the needs of polar bears and understand how continued warming will impact this sentinel species.

An additional benefit of the “Burr on Fur” devices is that they would allow scientists to follow the movements of adult males and subadult bears, two groups that can’t be studied  through current satellite collar technology:

The Burr on Fur project began with a challenge from Polar Bears International to 3M scientists. 3M scientists volunteered their time to create four prototype devices that are now in the testing phase both in the wild and in zoos, helping researchers understand which prototypes work best. In addition, the tests in zoos will provide insights into why a particular design failed (e.g., was the bear swimming? brushing up against something?), allowing researchers to make adjustments.

This innovative collaboration with 3M and Polar Bears International is now in the testing phase. Learn more about these new tags and how they will help us better understand polar bears across their range.

What does it cost a polar bear to swim? Or to walk across the vast expanse of sea ice?  Polar bears at the Oregon Zoo and San Diego Zoo Wildlife Alliance recently helped answer those questions by wearing accelerometer collars that helped researchers decode the signals related to each activity. The knowledge gained from calibrating the devices with zoo bears can now be applied to polar bears wearing the collars in the wild, providing insights into what polar bears do when they are out of sight, both on land and when hunting on sea ice.

The study is part of a much larger polar bear energetics project to determine the actual caloric cost of walking on the ice and swimming in open water. Both are critically important questions to help scientists better understand the species and how they may respond to a changing sea ice habitat. As sea ice both retreats and thins, polar bears are changing their movements in some areas—walking farther and swimming more frequently, and for longer distances. This research will help us understand those energetic costs.

From studies on bear spray to “detect and protect” radar, we research ways to keep polar bears and people safe.

Genetics research can answer many questions about polar bears, including the role genes play in their survival.

From studies on bear spray to “detect and protect” radar, we research ways to keep polar bears and people safe.

Genetics research can answer many questions about polar bears, including the role genes play in their survival.

Join us on our journey.

Become part of a community committed to protecting polar bears with our free newsletter.

The actions we take today give polar bears a chance at an even better tomorrow. 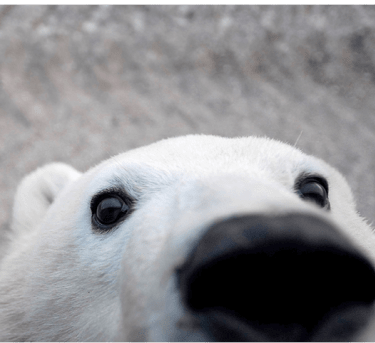